In June the Society  held a film evening at Whakamax, our local cinema, to commemorate 50 years the since  Apollo 11 mission to land men on the moon and bring them back safely, The movie showed never before seen footage.filmed during the mission.  It was quite an experience to see the  “primitive” computer systems that controlled this mission.  The emotion shown by the people in Mission Control, the astronauts, their families and the public was amazing to see.  Also enjoyable was looking at the cars, fashions and hairstyles of people in 1969.   The drinks and nibbles prior to the show featured a large  moonscape cake complete with rocket, astronauts and Neil Armstrong’s footprint. 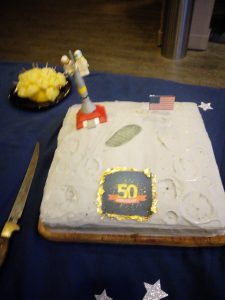